The move from 'Crypto Winter' into 'Crypto Spring'

The cryptocurrency market of 2018 might be best described as having experienced a year-long ‘crypto winter’. The peak market capitalisation of all cryptocurrency listed on exchanges monitored by CoinMarketCap clocked in on January 8, 2018, at $833 billion. This is the highest value ever recorded. It went on to decline some 87.75% over the next 12 months to reach a 17-month low of $102 billion by December 16, 2018.
‍
Since then, just over four months have passed and the market has seen significant recovery, with growing speculation that the winter is finally over and the cryptocurrency landscape is beginning to feel the warmth of a ‘crypto-spring’.
‍
Despite the bear market, raising capital through the creation and issuance of tokens, known as Initial Coin Offerings (ICOs), Initial Exchange Offerings (IEOs) and the like, grew. Total ICO funding reached $7.85 billion dollars in 2018 – 26.08% more than 2017 ($6.23 billion) according to icodata.io.

New cryptocurrencies launched and trading volume is at record levels in 2018 and 2019 to date. 24-hour trading volume hit an all-time daily high of over $88.9 billion on April 3, 2019, according to CoinMarketCap. Even when accounting for the unfortunate impact of probable wash trading in CoinMarketCap volumes, this is a striking increase, which likely still reflects very real growth in the digital asset markets.
‍
The HiveEx Cryptocurrency Landscape Report 2019, reviews what happened throughout 2018 and the start of 2019, which is shaping up to be an exciting year. Despite its ups and downs, one aspect about the blockchain space that remains unchanged is the relentless dedication, innovation and resourceful communities who are dead set on shaping the future of blockchain and indeed the future of the world.

ICOs as a mechanism for scams

2019 kicked off with mixed sentiment and uncertainty. While maintaining its market share dominance, bitcoin trended sideways in the early months. The HiveEx trading desk saw a majority skew towards experienced clients taking an opportunity to re-enter the market, many adopting a strategy to average their purchase over a period of time to best protect a potential further decline.
‍
On March 28 this year, we saw a 20% spike in the price of bitcoin during a single one-hour period. Post analysis indicates this came from a series of purchases of 1,000 bitcoin being executed across multiple exchanges, likely with the work of an institutional trading desk – either for themselves or a third party.
‍
Since the 20% spike in late March, buyer sentiment has gradually increased, leading many to believe it signaled the end of the bear market.
‍
It’s important to note that the space is not without it’s drama. Recently the exchange Bitfinex has come up against the New York Attorney General, putting its relationship with Tether under the spotlight. It was in relation to the borrowing of Tether reserves to cover an apparent US$850 million freezing of funds held in custody of one of the businesses banking partners.

While it’s important to understand the more recent events of the cryptocurrency space, it can prove to be extremely valuable to reflect on the longer term horizon.
‍
New bitcoin is created approximately every 10 minutes and given as a reward to the owners of computers that dedicate computing power to securing all transactions that occur on the bitcoin blockchain.

Every four years, the amount of bitcoin given in this reward, halves – this is known as the “halving”.
‍
Each halving reduces the rate of supply of Bitcoin, and historically has been found to correlate to how the market values the cryptocurrency.
‍
The below chart plots out the bitcoin price, colours the price by the number of months remaining until the rate of supply will next halve, and plots the stock-to-flow ratio during the time period.
‍
Stock-to-flow is a ratio that compares the amount of bitcoin currently in circulation and available in market (the stock), and compares this to the rate of flow, or the number of new bitcoin entering the market over time. 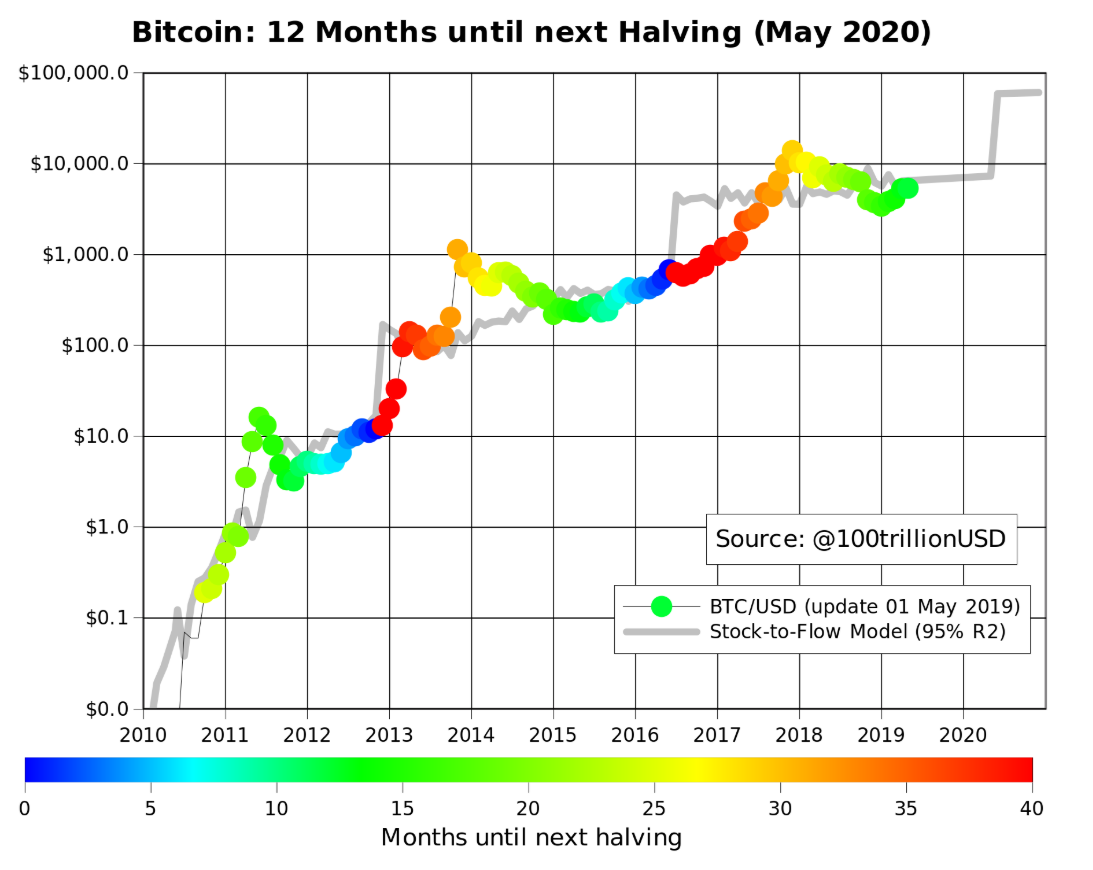 While past performance is not an indicator of future performance, the methodology behind this model can be shown to consistently correlate to the value of bitcoin, even when backdated to exclude data from recent months.
‍
Despite all the hype and drama associated with cryptocurrency throughout 2018, and indeed the years before it, it is a point of interest to see how things line up when reflecting on the bear market of 2018 and the recent price changes in 2019.

The number of BTC traded in each period was calculated by dividing the 24-hour trading volume by the price recorded at each period.

ICO data was sourced from icodata.io

HiveEx.com is an over the counter (OTC) cryptocurrency trading desk, which buys and sells large volumes of cryptocurrency, at a fixed price. ‍HiveEx is a trading name of Hive Empire Trading Pty Ltd, a subsidiary of Hive Empire Ventures Pty Ltd. Hive Empire Ventures (trading as Finder Ventures) is a related party of Hive Empire Pty Ltd, which owns and operates finder.com and finder.com.au.
‍
Disclaimer:
‍This information should not be interpreted as an endorsement of cryptocurrency or any specific provider, service or offering. It is not a recommendation to trade. Cryptocurrencies and ICOs are speculative, complex and involve significant risks – they are highly volatile and sensitive to secondary activity. Performance is unpredictable and past performance is no guarantee of future performance. Consider your own circumstances, and obtain your own independent legal, tax and accounting advice, before relying on this information. You should also verify the nature of any product or service (including its legal status and relevant regulatory requirements) and consult the relevant Regulators' websites before making any decision.

Hive Empire Trading Pty Ltd (trading as HiveEx.com) is registered with AUSTRAC, since April 23, 2018.
‍
© Copyright 2019 Hive Empire Trading Pty Ltd
Disclaimer: This information should not be interpreted as an endorsement of cryptocurrency or any specific provider, service or offering. It is not a recommendation to trade. Cryptocurrencies and ICOs are speculative, complex and involve significant risks – they are highly volatile and sensitive to secondary activity. Performance is unpredictable and past performance is no guarantee of future performance. Consider your own circumstances, and obtain your own independent legal, tax and accounting advice, before relying on this information. You should also verify the nature of any product or service (including its legal status and relevant regulatory requirements) and consult the relevant Regulators' websites before making any decision.